“That’s the only reason our lives follow that roller coaster. It’s that simple. As soon as we get away from failure and up past the line of survival, we quit doing the things that got us there."

"You know what that means? It means you already know how to do everything it takes to make you an outrageous success. That’s how you’ve survived up to this point. And if you can survive, then you can succeed. You don’t need to do some brilliant, impossible thing. You don’t need to learn some insanely difficult skills, or have some genius-level brainstorm of an innovative idea. All you have to do is keep doing the things that got you this far."

"Which is exactly what 99.9 percent of people don’t do.  What those things are, why most people don’t do them, and how you can live an outrageously happy and successful life by doing them, is what this book is all about.”

This book echo's quite a lot of personal development material..  For example; The Compound Effect, Atomic Habits and Think and Grow Rich!

"It’s easy to overlook them because when you look at them, they seem insignificant. They’re not big, sweeping things that take huge effort. They’re not heroic or dramatic. Mostly they’re just little things you do every day and that nobody else even notices. They are things that are so simple to do—yet successful people actually do them, while unsuccessful people only look at them and don’t take action."

"Things like taking a few dollars out of a paycheck, putting it into savings, and leaving it there. Or doing a few minutes of exercise every day—and not skipping it. Or reading ten pages of an inspiring, educational, life-changing book every day. Or taking a moment to tell someone how much you appreciate them, and doing that consistently, every day, for months and years. Little things that seem insignificant in the doing, yet when compounded over time yield very big results."

"You could call these ‘little virtues’ or ‘success habits.’ I call them simple daily disciplines. Simple productive actions, repeated consistently over time. That, in a nut shell, is the slight edge.”

Doing the little things that seem insignificant..  Consistently over time!

Have we heard this before? 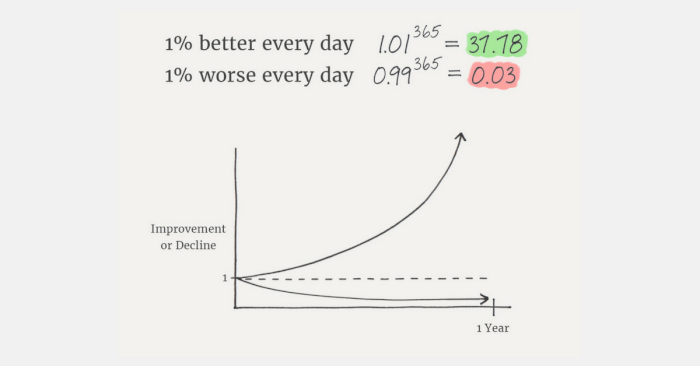 I love the name 'the slight edge' because it really inspires a commitment to consistency..

Are you willing to make this commitment to consistency that so many experts are talking about?

“Through a great film, you can experience the triumph of the human soul over adversity, the drama of a struggle between doing what’s right and succumbing to the temptations of the world, a moving encounter between generations, the flowering of a powerful romance, the struggle and birth of a nation. But it all has to be finished in two hours."

"Can you imagine a nation being born in two hours? Meeting the person who will become the love of your life—the dating, courtship, romance, struggle, triumph, wedding, and happy life thereafter—in two hours? Of course not."

"We expect to put out the effort of a thirty-second falling-in-love sequence, or fighter-in-training sequence, and get that same heroic ending. In a world filled with instant coffee, instant breakfast, instant credit, instant shopping, instant information, and 24/7 news, we have come dangerously close to losing touch with reality and believing we have access to instant life.  But life is not a clickable link.”

Life is Not a Clickable Link

This is one of the most beautiful passages on society today that I have ever read..

So many people get rich by selling the Instant Life to other people!  But worse than that is that so many people are looking for it..

Goals are important.. Striving for the success you want is important!

Where are you looking for a clickable link in your life?

Life is Mundane and Unsexy

“By the end of this book, or even before, I want you to know in your bones that your only path to success is through a continuum of mundane, unsexy, unexciting, and sometimes difficult daily disciplines compounded over time. Know, too, that the results, the life, and the lifestyle of your dreams can be yours when you put the Compound Effect to work for you. If you use the principles outlined in the The Compound Effect, you will create your fairy-tale ending.” - Darren Hardy

Success is a combination of those daily disciplines those things that are mundane and unsexy compounded over time..

Where have you embraced the mundane and unsexy in your life?

"One reason the slight edge is so widely ignored, unnoticed, and undervalued is that our culture tends to worship the idea of the ‘big break.’ We celebrate that dramatic discovery, the big breakthrough that catapults the hero into a new place. In other words, we buy lottery tickets."

"The truth of breakthroughs and lucky breaks is that, yes, they do happen—but they don’t happen out of thin air. They are grown, like a crop: planted, cultivated, and ultimately harvested. The problems is, as I mentioned last chapter, that in our culture we’re trained to think we can skip the middle step and leap directly from plant to harvest. We even have a term for it. We call it a quantum leap. And it’s a complete, utter myth.”

Have you ever looked at someone else's success and though..  Wow!  They did that so fast..  'I wonder what they did?'  Or maybe you though..  'They are so lucky!'

The truth is they didn't 'do' any one thing..  and almost certainly weren't lucky!

I love this concept..  'Luck is Preparedness ..  Period'

Preparedness is created by doing those simple, little constructive, positive action over and over..

This is especially true in any professional field!  People are very successful are almost always extremely prepared..

“‘Give me six hours to chop down a tree,’ goes the quote attributed to Abraham Lincoln, ‘and I will spend the first four hours sharpening the axe.’ Which left just two hours to do the actual chopping."

"In other words, he would spend twice as much time working on the tools of the job as he would on the task itself."

"And in the task called your life, what are the tools of the job? They are simply you: you are the axe. And no one knew that better than our sixteenth president, who poured enormous effort during his half-century life into making himself into the sharpest, strongest, truest axe he possibly could.”

In the task called life..  You are the axe! How are you sharpening yourself?

These are the simple things that are going to make you more effective long term..  Not the heroic acts!

What are you doing everyday to sharpen the axe?

“On its way to landing astronauts safely on the surface of the moon, the miracle of modern engineering that was an Apollo rocket was actually on course only 2 to 3 percent of the time. Which means that for at least 97 percent of the time it took to get from the Earth to the moon it was off course. In a journey of nearly a quarter of a million miles, the vehicle was actually on track for only 7,500 miles. Or to put it another way, for every half-hour the ship was in flight, it was on course for less than one minute. And it reached the moon—safely—and returned to tell the tale."

"How was such a thing possible? Because modern space travel is a masterful example of slight edge course-correction in action."

"If this machine, at the time one of the most sophisticated, expensive, and finely calibrated pieces of technology ever devised, was correcting its own off-course errors twenty-nine minutes out of every thirty, is it reasonable to expect that you could do better than that?"

"Let’s say you were able to match an Apollo rocket’s degree of accuracy in the pursuit of your own goals: that would mean that you’d be perfectly on target and on course no more than ten days in any given year. The next time you’re giving yourself a hard time because you feel like you’ve gotten off track, think about the Apollo program, and give yourself a break.”

As Jeff illustrates in the Apollo rocket analogy we are almost never really 'on track' yet we beat ourselves up when we feel we've gotten 'off track'..

Also we often don't just look at the small changes we need to make to course correct..  No instead we look at the massive amount of work we actually have ahead of us!

What is Your Moon Landing

Everyone involved with the Apollo space missions knew that their end destination was the moon..

And because they were so intently focused on landing there they didn't focus much on being off course..

Instead they course corrected.. just enough to get them back on track for a moment!

Then they almost immediately got off track again..  To which they responded by resolving that 'they didn't really want to go to the moon anyways'

Plan Not to Plan

“This is the point where people are often thrown off track. It’s easy to assume that you need to put together the plan that will get you there—in other words, the right plan. The plan that will work. No."

Even The Best Plans Fail

As Jeff says here..  We often think we need to plan something out from start to finish!

While it might be a good exercise in some of these disciplines..  It's assured that you first plan will fail!

So why not instead just plan to do something that will get you to the starting line?

How Can You Start?

This is the most important part of the plan..  Think about how you can get started!

What's one small thing you can do right now to get going?

“There are many definitions of integrity. Honesty. Truthfulness. Congruence between words and deeds. The aspect of integrity that is most applicable to the slight edge is this: what you do when no one is watching."

"It’s in that moment’s decision, when nobody else is watching and no one will ever know, when your choice is so slight, so subtle, so insignificant ... it’s at that moment that you find out whether or not you have slight edge integrity.”

What do you do?

There will certainly be times in your career, health or finances that you will have to do small, mundane and unsexy daily disciplines when no one is watching..

Meaning that there will be no 'social reward' for completing the task!

What do you do then?  That's what really matters..  Can you hold yourself accountable?  That's self discipline!

Brian Tracy says this about self discipline

“The ability to discipline yourself to delay gratification in the short term in order to enjoy greater rewards in the long term, is the indispensable prerequisite for success.” – Brian Tracy

"Show up consistently with a positive outlook."

"Be prepared for and committed to the long haul."

"Be willing to pay the price."

"And do the things you’ve committed to doing—even when no one else is watching.”

This quote is from the chapter where Jeff shows us the 7 habits of highly effective slight edge masters..

Keep them in mind and continue along the path of consistency!