"The world’s top physicists used to believe that anything that entered a black hole was obliterated. But this is no longer a popular viewpoint. Current research shows that, instead of destroying objects, black holes transform them."

"Imagine if your purpose in life was as powerful as a black hole. With a force this strong, absolutely everything in your life would be pulled towards it. Nothing would escape. Every thought, every action—your entire identity—would be sucked into it. And, as a result, who you are, what you have, and how you live would be completely transformed."

"Determining your ultimate purpose in life is the toughest decision you will ever make, which is why so few people actively decide on one. Instead, most people let life make this critical decision for them. These people fritter their lives away in an endless stream of tiny, meaningless decisions that elicit no great change and leave no real impact. They spend all their time and resources putting out day-to-day fires and focusing on short-term objectives."

"Black Hole Focus will show you how to avoid this hollow fate, how to decide your purpose, and how to align your life around your chosen path.”

What is your ultimate purpose in life?

So tough that most people don't even ask the question of themselves!

Instead they go with the flow and don't worry so much about the 'why' of it all..

That is one way to do things!

But as laid out in this book if we choose that path we're certainly missing out..

Instead of drawing energy into ourselves and transforming it into something meaningful..

We might spend our energy working on something that doesn't fulfill us..  Only to come home tired at the end of the day!

Before we get started..

Let's check in!  Where are you?

Do you know your purpose and have a clear understanding of how to align your life around that chosen path?

Or are you more going with the flow and not worrying about what your true priorities should be in this one lifetime we get?

*Quick note this is a heavy book (if you couldn't tell some the beginning.  Proceed with caution.

“Sheep are the ultimate tacticians."

"They only respond to two things: sticks being banged behind them and carrots being held out in front of them. This is why it’s so easy to shear sheep."

"Their herd mentality and lack of foresight make it very easy to funnel them down a narrow track until they are stuck; trapped by their own tactical nature."

"But sheep aren’t the only animals that get stuck by groupthink and nearsightedness. It happens to humans too."

"When we live our lives within the herd and without farsighted vision—like sheep instead of strategists—we end up trapped. Feeling trapped in a situation or bound by your circumstances is one of the worst feelings in the world. It can feel like you’re slowly rotting while everyone else is getting ahead."

"The good news is that no matter how far down the tactical rabbit hole you have traveled, it’s never too late to start thinking like a strategist. A strategist is someone who can see the end from the beginning and who acts independently from other people’s expectations."

"A strategist is someone who maps out their purpose in life and works backwards to fulfill that purpose.”

Are you a sheep or a strategist?

Here is how you can tell:

Spend their time worrying about what other people think..

Live their lives based on what others are doing and following a path set out for them..

Succumb to nearsightedness and chase pleasure and avoid pain at all costs..

Are deeply in touch with their purpose in life and don't let any opinions effect that..

Think independent of pathways set out in front of them by society..  Instead follow the path they create for themselves!

Have a long term, outcome based framework for making decisions in the moment..

Why aren't there more strategists?

What is the point?

“In The Blue Zones, Dan Buettner describes regions of the world where people commonly live active lives past 100 years old."

"Buettner discusses a particular Blue Zone located on the northern part of the main island of Okinawa. He calls this place ‘ground zero’ for world longevity because people in this area have the longest disability-free life expectancy in the world."

"These Okinawans live about seven good years longer than the average American. They also have one-fifth the rate of colon and breast cancer, and one-sixth the rate of cardiovascular disease."

"The Okinawan language has no word for ‘retirement.’ Instead, there is one word Okinawans live their life by: ikigai. Roughly translated, it means ‘the reason for which you wake up in the morning.’ Whether it’s teaching karate at 102 or learning to fish at 104, the Okinawans maintain a strong sense of purpose. Buettner believes this intimate relationship with direction is why Okinawans often live so long.”

The reason you wake up in the morning..

Also happens to be the reason some people live much longer - fulfilling lives than others!

How do you find your Ikigai? 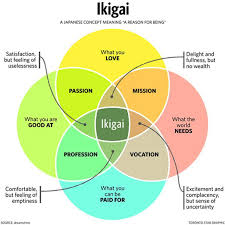 “In the 1950s, Curt Richter, a Harvard graduate and Johns Hopkins scientist, did a series of experiments that tested how long rats could swim in high-sided buckets of circulating water before drowning."

"Dr. Richter found that, under normal conditions, a rat could swim for an average of 15 minutes before giving up and sinking."

"However, if he rescued the rats just before drowning, dried them off and let them rest briefly, and then put them back into the same buckets of circulating water, the rats could swim an average of 60 hours. Yes, 60 hours. If a rat was temporarily saved, it would survive 240 times longer than if it was not temporarily saved."

"This makes no sense. How could these rats swim so much longer during the second session, especially just after swimming as long as possible to stay alive during the first session? Dr. Richter concluded that the rats were able to swim longer because they were given hope."

"A better conclusion is that the rats were able to swim longer because they were given energy through hope. The rats had a clear picture of what being saved looked like, so they kept swimming.”

What does hope mean?

How can we give ourselves hope?

Something I learned from Brian Tracy recently inside his book Maximum Achievement 'Has it Been Done'!

Step One: Determine your compelling version of the future (your vision) and write it down..

Step Two: Find someone who has accomplished that vision and see their obstacles..

Step Three: Remember if it's been done before with someone who has as many or more obstacles than you you can do it too!

“You can achieve greatness."

"No matter where you are in life right now, there is something you can be uniquely incredible at."

"But before you can be incredible, you must believe that you can do anything. That’s the first step. The next step is a little harder; you must decide what you want to be incredible at.”

There is something that you can be incredible at..

The first step to actualizing this is believing!

The next step is to decide on our path!

Spend it going 1 unit in 10 directions

Or spend 10 units in one direction

Obviously we want to get as close to spending 10 units in one direction as possible!  That's how we're going to be able to become world class at anything.

How do we decide on the path?

"Your vision will remain a fantasy until you decide to transform it into reality. Without a decision, your vision is a pipe dream. It’s wishful thinking. This is how most people live their entire lives, hoping for something to happen but never deciding to make it happen."

"Their goals are better described as wishes. Their visions are hallucinations. You can be different by making the decision to fulfill your purpose."

"Cut yourself off from any other option. By making this decision, you will automatically raise your mind’s expectations. You will bring the full breadth of your mental powers to attention.”

A vision is just a hallucination without a decision!

The number one decision..